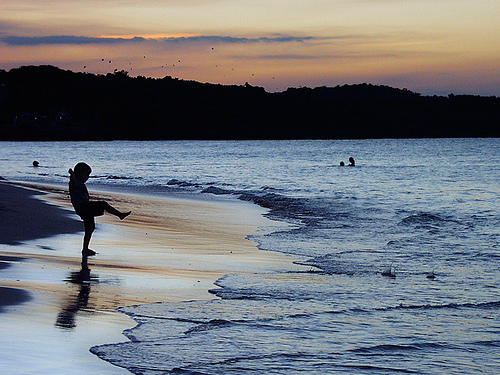 A few days ago, Mara Rogers wrote a post for Copyblogger about SpeedBlogging. Her post had a lot of smart tips for writing blog posts more quickly and efficiently, and I don’t disagree with any of the advice she gave.

But I’d like to propose another way to approach your posts: SlowBlogging.

Heard about the Slow Food movement? They’re an organization devoted to food that’s less convenient. No tomatoes in January (or June, if you live in Melbourne), no Lean Cuisine, no balancing a Big Mac on the steering wheel while you’re trying to merge onto the freeway. The Slow Food movement is all about food that’s quirky, local, and tasty.

Blogging is inherently a quick medium, but sometimes you want some handmade content that takes a little more time.

Chris Garrett calls these posts flagship content. Most blog posts are best consumed when they’re fresh, but these keep their value. They act, in Chris’s phrase, as “ambassadors for your blog.” They build your reputation and you can send readers to them again and again.

Solid “pillar” or “flagship” content takes a little longer to put together than routine daily posts do. Here are some SlowBlogging ideas you can try when you’re creating that cornerstone content.

Mara’s an advocate of keeping a bank of ideas for future posts, and so am I. There’s nothing worse than wanting to cook up a tasty blog post and having nothing in the pantry.

Some ideas are topical, and you’ll need to write them up right away. If you’re going to comment on the latest celebrity train wreck, you’ll need to strike fast. But other ideas need more time to mature. You might think of them as bottles of homemade elderberry wine. They don’t taste too good when you first bottle them, but after they’ve been sitting for awhile, they start to get really tasty.

You’ll have some ideas that you’re just not sure what to do with. Park them in your idea cellar until they’re ready. Although some ideas do turn out to be duds, I’ve found that I often get the best posts out of ideas that have been sitting dormant for the longest time. You never know when that idea will ripen up and give you the perfect angle for a classic post.

Should it be a series?

Some ideas refuse to gracefully boil down into a single blog post. If you have a topic that’s getting away from you, consider making it a series.

Writing a blog series lets you give some loving in-depth attention to a topic without overwhelming your readers. And it gives you a wonderful feeling of luxury to know exactly what you’re going to write about for the next 7 or 8 posts.

A well-written series can form a terrific cornerstone for a blog. You might want to check out Brian’s Copywriting 101 series to see how he did it over on Copyblogger. I recently had a great time with a series on Dumb Things Small Businesses Do.

I love Mara’s fearless advice to “write and commit, then click Publish.”

I can tell you from personal experience that my method isn’t necessarily the key to optimal blogging productivity. But for me, writing is rewriting. It’s in the editing stages that I find the most important ideas in a post and polish them up to make them shine. (As well as clearing away any murky stuff that makes the post less delicious.)

I try to write a post two days before I want to post it. Over those next two days, I’ll read the post with fresh eyes each day and make changes. I do a last pass when I’m prepping it to post.

I do sometimes write “same-day” posts, but when I do, I still try to run through them at least three times. And if I can give myself a break between rewrites, I do.

This is a time when you want to know yourself. If you’re putting your posts through dozens of rewrites because you’re insecure or perfectionistic, try to force yourself to let go a little earlier in the process.

But if you tend to post your first drafts, try a few rewrites, especially on your authority content. You just may see a new depth and weight appear in your writing.

The Slow Food movement is all about taking a long Sunday morning to simmer the perfect pasta sauce just because you want to. You take your time picking out the perfect ripe tomatoes, you make a special trip to the farmer’s market for those really good Italian sausages, not because you have to, but because it’s enjoyable.

Sometimes you need to be efficient and get a point across. But I hope you’re also taking some time to write posts that give you pleasure. Play with language a little. Have some fun tossing an idea around. Let your personality come through.

Life is too short to bore yourself with your own content. No, it’s not all about you, but you’re also not a content-producing automaton. At least sometimes, take the time to savor the process of writing.

Mara’s SpeedBlogging techniques are definitely useful. And sometimes you want a nice, quick stir-fry list post for your blog. But when you need a long-simmered blog post Bolognese, give SlowBlogging a try. Variety is the spice of life . . . and blogging.

If you liked this post, please link to or Stumble it!

I came across a great little business the other day, with a service I needed, at the right price … END_OF_DOCUMENT_TOKEN_TO_BE_REPLACED