Yes, it’s a guest post! My friend and all-around wise dude Charlie Gilkey graciously offered me this guest post as a way to rouse Remarkable Communication gently from its slumber. 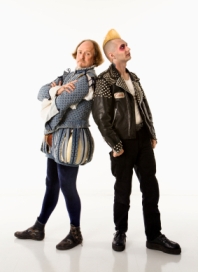 This is the second part of the How To Blog Like Shakespeare series from Charlie Gilkey. Check out How To Write For New Readers if you missed Part 1.

Regular readers are familiar with you and your content, so they’re already keyed into how you write and what you’re about. They’re also likely to be your friends, fans, champions, and customers.

The fact that they’re familiar with what you’re up to, though, can also make it more difficult to write for them. They might have already learned some of the stuff you’ve written for your new readers, so the way you write for your new readers won’t provide a lot of value to them. While they may have some favored themes and topics, to keep their attention, you’ll have to provide them something new.

The challenge, then, is to write about the same themes and topics while adding some novelty to them. Think about this as if you were putting on a concert: your fans love to hear your old songs, but if you play the same songs the same way every time, it’ll get old. However, if you play the old song in a slightly different way, they’ll be interested and entertained all over again. Lastly, if you play a bunch of songs they don’t know, they’ll be a bit confused and maybe a little frustrated.

Here are some ways to write content that remains fresh, informative, and valuable for your regular readers:

Explain Things In A New Way

As bloggers, we have a tendency to think that once we write about something, we don’t need to come back to it again because it’s old and uninteresting. After all, if we said it once, why do we need to say it again?

What we forget, though, is that we have readers who may not have read it the first time, and, even if they did, they might need to hear it again.

Explaining things in a new way is a win-win for both the blogger and the reader. By trying to explain it in a new way, we spur the creative process and make the old and uninteresting into the new and interesting. For other readers, it’s a chance to read it the first time or learn it anew.

Metaphors and analogies are your friend here. A picture is worth a thousand words, and metaphors are like conceptual pictures. Analogies are helpful because, if you do it right, you take people from one thing they already know to something that they don’t. The more cognitive maps and reinforcers people have, the more likely it is that they’ll integrate your content into their experience and habits.

Keep Them In The Know

You can only blog about the same themes and topics for so long before everybody gets tired of it. One of the most valuable things you can do for your readers is to be a source of new ideas and conversations. Most people don’t have the time or interest to do a lot of reading and research, and, if you’re already doing it, you have a rich opportunity to keep them in the know without having to come up with new content all by yourself.

If you can find a way to integrate those new ideas into the topics on your blog, then you’re showing three things: 1) the content on your blog has general applications, 2) other people are interested in things that you’re interested in (this gives your ideas increased validity), and 3) you’re someone who’s keeping up with what’s going on.

If you’re learning, growing, and sharing valuable information with them, then they’ll want to keep up with you so that they can learn and grow with you. Having some structure to your blog is a good thing, but you don’t want so much structure that it becomes static and boring. Balancing creating and consuming is a sure way to keep regular readers happy, as your content will be sustainably fresh, informative, and helpful.

If you have a personal story that’s relevant to your blog, then share it. “Relevance” here is broadly construed: a story that helps your readers get to know you is relevant because it’s informative and interesting. At the same time, a mundane story about what you ate this morning is not relevant. A story could also be relevant because it helps show a point better than a less tangible explanation.

The trick to making your content personal is to make the content about your readers and not about you. If there’s too much “you” and not enough “them,” it’ll come off as narcissistic. As long as your readers are getting something out of your personal content, you’re good to go.

Alternatively, you can also make it personal by writing in a way that’s uniquely you. Think about your favorite bloggers here: you can probably identify their writing style in just a few sentences because the way they write is so unique. It takes time to find your own voice, but it’s well worth the effort.

Show That They’re Part of the Conversation

Responding to comments is an easy way to engage readers, but some of your regular readers will start leaving really good comments that are worth more than a response in the comment section.

Aside from encouraging people to leave comments, this also shows your regular readers that they are part of the conversation and have insightful things to say. When you do this, your blog moves from being a one-way conversation to a forum for discussing ideas, and you become more than a blogger to them — you become a person that they can talk to and interact with.

Before you write this off as me being a kumbaya blogger, remember that people are likely to share a post that they’re featured in with their audience. They may even extend the conversation on their blog, which gets you an additional link and more readers. The more people identify with you and your blog, the more likely they are to share your blog with others. Never underestimate the power of having a community around your blog.

Ever wonder why musicians have parts of their show where they encourage people to sing along or clap? It changes the feel of the concert so that it’s not so much about the musician as it is about the music. You can and should do the same thing on your blog.

Regular Readers Are The Backbone of Your Tribe

Though your regular readers make up a small fraction of the numbers you see on your feedcounters, they are the people who leave comments, grok and share your content, and purchase your products and services.

And even the ones who don’t interact with you are lurking in the background and might one day say hi at a conference or click to buy a product.

In short, regular readers are the ones that most of us get up in the morning to write for, even if it can be a little more challenging at times.

While it’s highly likely that Shakespeare had regular attendees to his plays, the Bard’s “regular readers” were the people who had enough education and sophistication to understand the cultural context in which he was writing. Part of the suspense of Julius Ceasar for his regular readers was seeing how Brutus fell — they already knew it would happen, so it took some art on the part of Shakepeare to make the story interesting. This is where our challenge is the same as his when it comes to regular readers: we have to take what they already know and make it interesting. But we have write in such a way that people who aren’t familiar with the background can also follow the conversation.

Sonia’s also very good at writing for regular readers. I’ve been a regular reader of her posts here and on Copyblogger for years, and every time I read a new post I learn something new.

For instance, I recently completed one of her free e-courses, and while it was a great refresher course for me, her ninth piece in the “Email and Content Marketing” course spurred some creative ideas about how to get people outside of my audience to sign up for my newsletter. By explaining email and content marketing from this broader perspective, she taught me something new and incredibly useful despite the fact that I’ve been a fanboy for a good while now.

In the next part of this series (to be aired on my blog, Productive Flourishing), we’ll see what experts are looking for and discuss ways to write for them.

About the Author: Charlie Gilkey writes about meaningful action, creativity, and entrepreneurship at Productive Flourishing. Follow him on Twitter to get more of him without having to read monolithic posts.

Back in the early months of the pandemic, I noticed how many normally productive people were saying … END_OF_DOCUMENT_TOKEN_TO_BE_REPLACED