When I was on vacation a few weeks ago, I went out to dinner with my friend Isabel. She wore a simple dress and a really cute cotton hoodie. Ever since I got home, I’ve been trying to find a hoodie just like it.

None of these traits is true for me. So I’m taking a garment that looks terrific on someone else and trying to make it work for my very different situation. And it doesn’t.

For some reason, this surprises me.

Ever try to imitate someone else’s attitude or writing voice? How many of us started out trying to be Seth Godin? (raises hand) Or Chris Brogan or Darren Rowse or Naomi Dunford?

You can learn a lot by modeling someone who’s doing what you want to do. But before you can make any real success with it, you’re going to need to learn to sing with your own voice. Their model is always going to be too tight in the elbows and too baggy in the rear, because it doesn’t belong to you. You’re just borrowing it.

Are you letting other folks dictate how much selling you do? Telling you you’re “too salesy”? Or maybe that you aren’t selling hard enough?

Do you get one unsubscribe to your email list and start second-guessing yourself based on their parting comment?

Are you using a technique because “it works,” even though it makes you sick to your stomach?

Virtually every successful blogger or business owner you know had to throw away some piece of conventional wisdom. They may not have an elevator pitch, or a traditional USP. Their email newsletters might be too long and their sales letters too short.

Because they tried it out for themselves, and this is what worked for them. Worked in terms of their goals, which might have been bigger than “bump up conversion” or “increase leads.”

Taking advice is smart, and there’s plenty of good advice out there. But advice is the starting point, not the end.

Every one of us needs to draw our own blueprint. If yours ends up looking pretty different than the model you started with, don’t let it worry you. That’s how you can tell you’re doing it right. 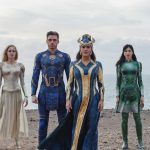 I caught the Marvel movie The Eternals for the second time on Thanksgiving Day. I found it a … END_OF_DOCUMENT_TOKEN_TO_BE_REPLACED